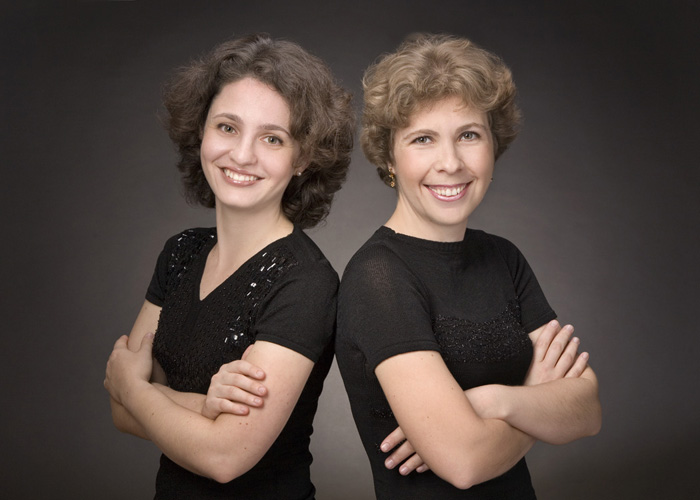 The Varshavski-Shapiro Piano Duo is comprised of pianists Stanislava Varshavski and Diana Shapiro, who began playing together in 1998 at the Jerusalem Rubin Academy in Israel. Since then, they have gone on to capture the top prizes at numerous competitions, including the most prestigious competition for piano duos – the Murray Dranoff International Piano Competition in Miami.

The Varshavski-Shapiro Piano Duo has performed in such distinguished venues as the HKAPA Concert Hall in Hong Kong, Henry Crown Symphony Hall in Jerusalem, Teatro Valle in Rome. The Duo has recorded for the Bavarian Radio, the Radio 4 of Hong Kong, the Israeli National Radio and TV, and the New York’s WQXR. They produced a CD in collaboration with the Wisconsin Public Radio and recorded for a documentary film, presented on Wisconsin television.

As music educators, Varshavski and Shapiro frequently present lectures and master classes across the United States.

Diana Shapiro was born in Moscow, Russia. At the age of 17 she moved to Israel and started her studies at the Jerusalem Rubin Academy. She currently serves as an Assistant Professor of Piano at the University of Minnesota-Duluth where she teaches applied and class piano, piano literature, and pedagogy.

Stanislava Varshavski was born in Kharkov, Ukraine. A young piano prodigy, she had her orchestral debut at the age of eight. After receiving her initial musical training in Ukraine, Varshavski proceeded with her studies at the Jerusalem Rubin Academy in Israel. She currently serves as Director of Music Education at Holy Family Conservatory of Music Manitowoc WI.